In transit to the next town on the schedule of the All American Redheads,  Coach drove the limo a few miles ahead and waited for them to catch up.  It was not unusual for the team to drive 60,000 miles per season.  Once at the next destination, teammates at times would do their laundry at the town laundromat, the realities of traveling with just one set of street clothes and one uniform set per player.  Come game time, the Red Heads showed up on the basketball court and then some. 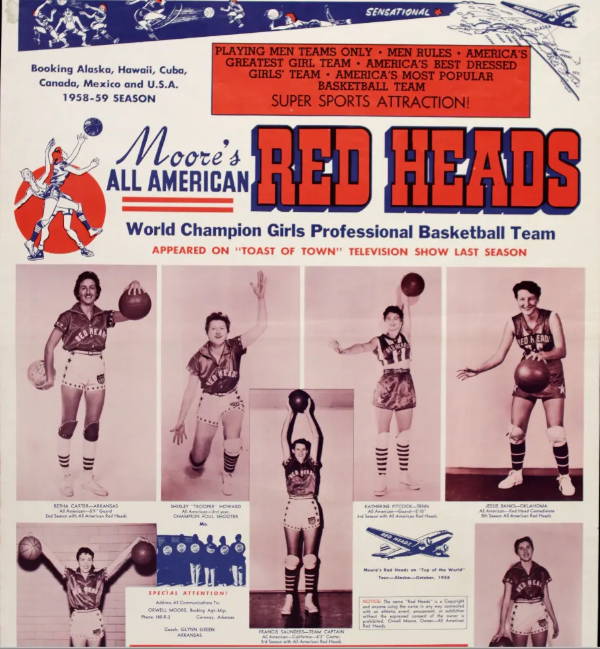 Formed in 1936, the Red Heads were Americas first professional women's basketball team, eventually becoming  Americas longest running professional women's basketball team. Successfully barnstorming the nation for 50 years, solely playing mens teams, by mens rules.   From boys to men, it didn’t matter if the opposition was high school, collegiate, military or any other male squad formation willing to take them on, the Red Heads were down to play and to win, using every trick in their playbook. And it worked.  The All American Redheads won 70% of the games they played, charming and confusing the mens teams with solid ball playing skills and feminine circus like hi-jinx. The proverbial barn was being stormed, by a skilled team of charming flame haired ladies in red, white and blue satin uniforms.  Double takes and triple takes left the defending teams heads collectively spinning and their feet scrambling to catch up. Playing it straight during the early in the game, the Red Heads would expertly turn up the heat as the game moved on, showing fancy dribbling, trick shooting, and rapid-fire passing.  Opponents and spectators alike impressed with their skill, their talent, and their humor. 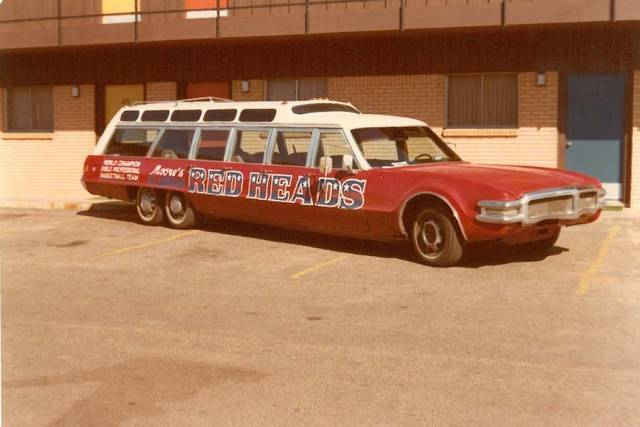 According to the  the Council Bluffs Nonpareil in 1949: “Besides the undoubted ability they possess, the Red Heads get by with modified murder. They know how to complete the job of getting the goats of opponents and officials who are usually somewhat discomfited before they start.

What’s a poor official going to do, after he’s been rewarded for calling a foul against one of the girls by a forgiving hug and kiss? And what’s a rugged male basketball player to do when, starting a long dribble down the center, he finds that a comely miss has linked arms with him and is trotting adoringly at his side?”

Rural 1940s America newspaperman quips aside, these ladies knew how to drive the lane. 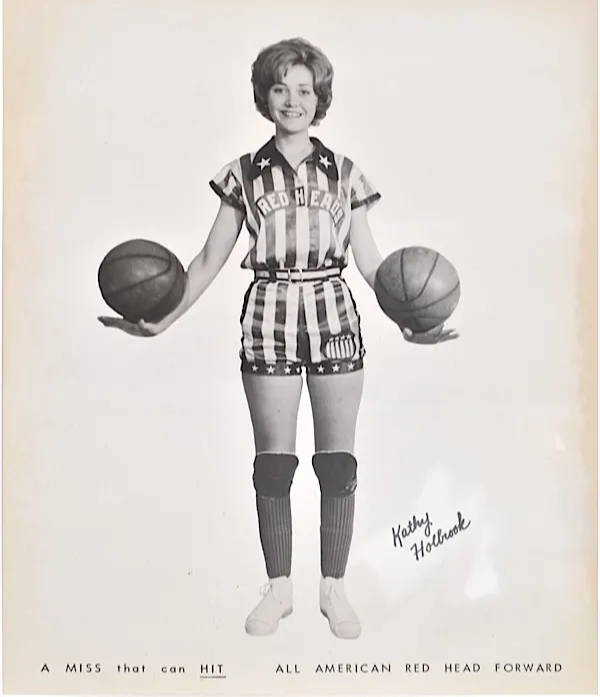 First renditions of the team consisted of former Amateur Athletic Union (AAU) athletes, including a six-foot center and Olympic star who held records in the basketball throw, baseball throw, discus, javelin and shot put.  Playing  6 month seasons where they averaged 160 games annually Oct through April, at one point winning 96 games in 96 days,with three days off and three doubleheaders the Red Heads could draw 2,000 people to games in towns of 3,000 people.

In 1940, they became the first professional basketball team to play in the Philippines, before a crowd of 10,000.  During the War II, the basketball courts of army camps and military hospitals they played were so packed there would be hundreds of disappointed servicemen watching from outside, hoping to get a glimpse of the magic happening inside.  The Red Heads adored this and visited injured soldiers bedside before attending post game tea dances held by the servicemen.  As the decades progressed so did their routines.  Among them was the dipsy-doodle, in which a player would dribble toward the basket, between her legs, lean forward and shoot over her own back.  The Red Heads also performed knee shots and dribbling routines like  the piggyback — where one player hopped on a teammate’s back to dunk the ball.   By  the late 60s and 1970’s, there were three teams on the road simultaneously. 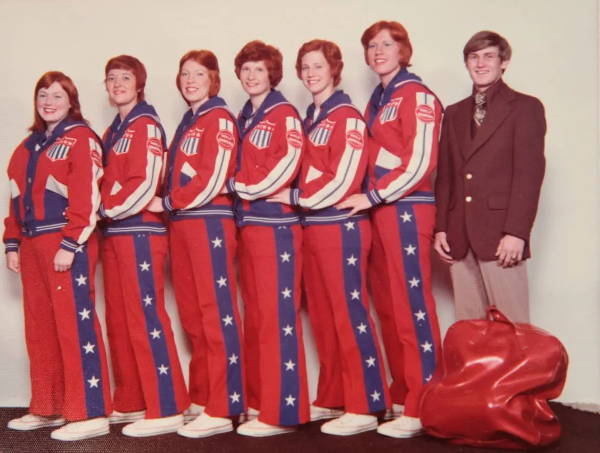 But, just how did all this come to be?

The All American Red heads learned their skills from the originator of the back-handed pass, Connie Mack Olson, (“Ole” for short) who founded the All American Redheads after many years on the road with his first barnstorming team, Olson’s Terrible Swedes. The Terrible Swedes barnstormed for many years in the 1920s and 1930s playing against other traveling teams like House of David, as well as local and collegiate teams criss crossing the country.  Ole knew barnstorming better than anyone- from all levels, be it player, coach, manager or owner.

When Ole was done with the circuit in the early 1930s, he returned home to Cassville, Missouri. There his wife, Doyle ran a chain of beauty salons.  Several of the employees at her salon liked to shoot hoops after work at the local gymnasium.  It is from this feminine hometown camaraderie the concept came to pass. They started kicking around the idea of a traveling women’s barnstorming club and took it to Ole.  He liked what he was hearing- but thought that an all women’s traveling basketball club needed something extra and catchy to unify them and not only grab, but keep the publics attention. Amongst this original group were Amateur Athletic Union athletes and a former Olympic star record holder in baseball, basketball, discus and shot put. A few of the women were already natural red-heads.  One idea led to another.  Beauty shop.  Hair dye.  Bingo.  The Cassville Red Heads were born.  As their game and their fame grew, so did their name, finally becoming the All American Redheads.

“Dressed in their brilliant red, white and blue uniforms the towering Red Heads from Cassville, Mo., flash an attack of hardwood wizardry that rivals any offered in the nation,” wrote the Lubbock Avalanche-Journal in 1939. “Several high school, college and university quintets have met defeat at the All American’s hands and other men’s squads have had to use every trick they could muster to eke out a victory.”

Enter Orwell Moore, who joined as coach in 1948.  In 1955, he purchased the team from Ole and moved it from Cassville, Missouri to Caraway, Arkansas,  His wife, Lorene “Butch” Moore was an integral member of the team for 11 years prior, during which she spectacularly scored 35,426 points.  Seemingly a pre-destined match up, together they owned and managed the team through the rest of its existence, breaking many barriers to women in sports along the way.  The All American Red Heads are the precursor to Women’s Collegiate Basketball, and the WNBA.  Plus, they taught everybody's favorite Golden Girl, Betty White, how to spin a basketball on her finger. 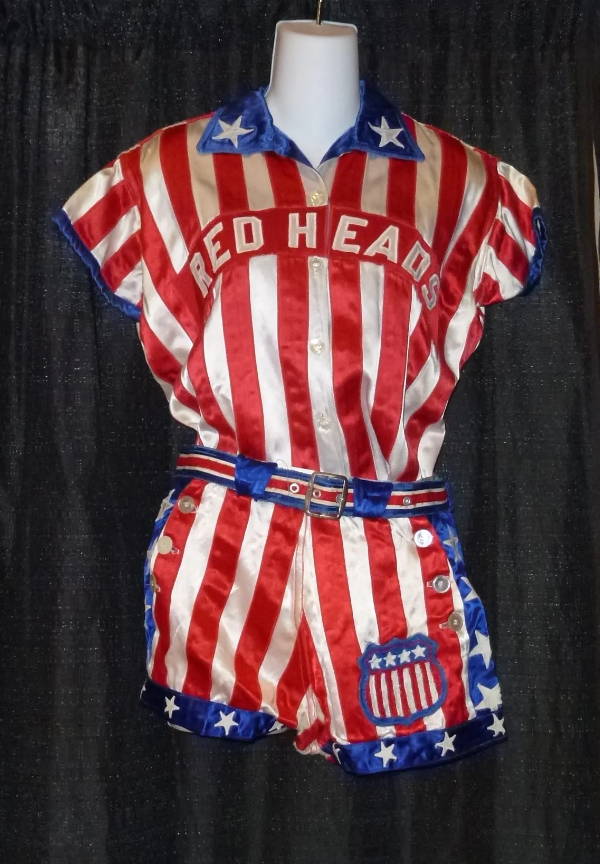 Thank you to The All American Red Heads.  You were a myth busting movement, successfully playing 5 on 5 with the guys during an era when it was considered inappropriate to even shake a woman's hand.  And you did it all with style, grace, skill and humor.

-In 2012 the team was inducted Naismith Memorial Basketball Hall of Fame.

-In 2017 the team was inducted into the Missouri Sports Hall of Fame.

-In March 2020 the team was inducted into the Arkansas Sports Hall of Fame.