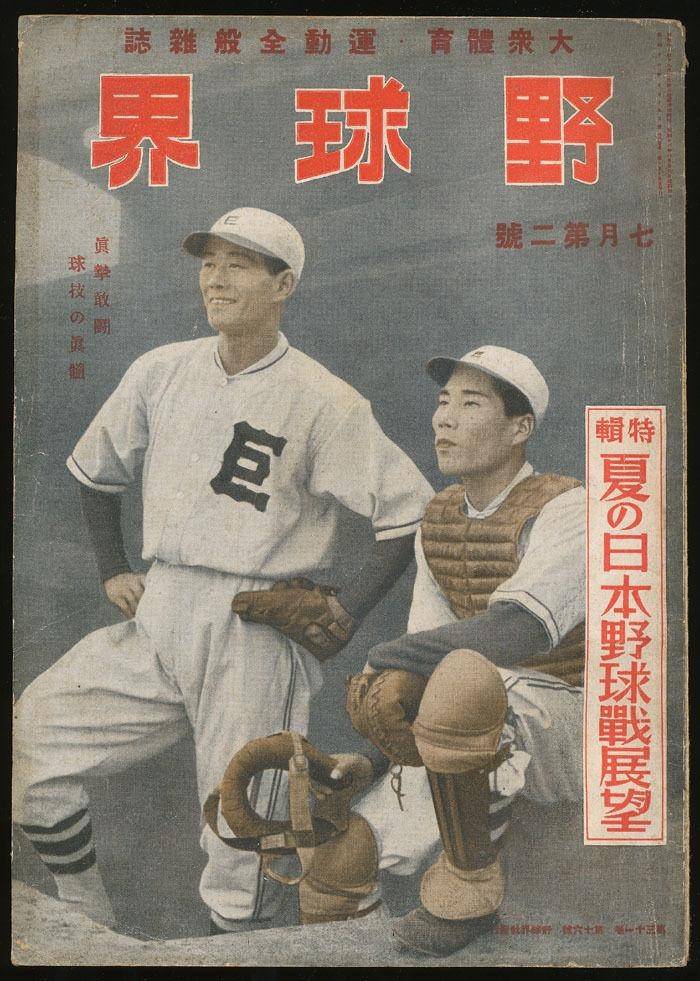 Japanese pitcher Eiji Sawamura only won 64 games in his entire professional career, yet he became the most revered pitcher in the history of Japan at just seventeen years of age because of four famous strikeouts that came to symbolize the spirit of Japan.

When the United States sent a star studded baseball team to Japan in 1934, the team’s official purpose was a goodwill mission to promote friendship between the two countries. However, the team’s unofficial purpose was to gauge the threat of anti-American Japanese imperialism and temper it by showing off the immense power of America. Rather than show off that power by sailing America’s most fearsome battleships into Tokyo Harbor, America’s most fearsome ballplayers––a team featuring Babe Ruth, Lou Gehrig, Jimmie Foxx, Lefty Gomez, Charlie Gehringer and managed by Connie Mack––paraded down Tokyo’s streets and into Japan’s ballparks to exert their physical dominance over their Japanese counterparts in a friendly proxy war. While this mission was largely successful in that Babe Ruth was greeted by chants of “Banzai Babe Ruth!” and Japanese fans packed stadiums to watch these larger than life American heroes win most of their 18 games in Japan by blowout margins, it also backfired when the Americans’ powerful lineup was virtually silenced by Japan’s diminutive but ferociously competitive teenage pitcher.

Several months earlier, Sawamura was the ace pitcher of his high school team when news arrived of the Americans’ upcoming visit. The organizer of the Japanese team that would take on Ruth’s All Americans convinced Sawamura to leave high school early, sacrificing his dream of attending university, and join the team for $36 per month and the chance to show his ability against the best ballplayers in the world.

In Sawamura’s first start against the Americans, in front of 60,000 people in Tokyo, he gave up a home run to Ruth in the first inning, and 10 runs total on 11 hits over 8 innings of work, but did also record strikeouts against both Ruth and Gehrig. Those strikeouts gave Sawamura the confidence he needed for his next appearance. 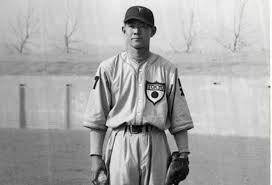 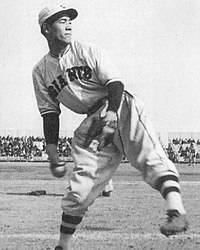 On November 20th, 1934, at Kusanagi Stadium in the city of Shizuoka, Sawamura stepped onto the mound as a relief pitcher in the fourth inning of a scoreless game and would produce one of the most iconic pitching performances in the history of Japan. Leading off the fourth inning for the All Americans was Eric McNair, a 25-year-old infielder from the Philadelphia Athletics. Sawamura retired McNair with a flyout to right field. Next to the plate was Charlie Gehringer, a second baseman with the Detroit Tigers who had just completed the ‘34 season with a .356 batting average and finished second in the American League MVP voting. Sawamura struck him out. The third hitter of the inning was none other than Babe Ruth, the most titanic figure in baseball at the time and possibly ever. Even at 39 years old in 1934, Ruth still carried himself with the aura of a global superstar and packed some power behind his famed 44-ounce bat. After burning two fastballs past Ruth to get ahead 0-2 in the count, Sawamura unleashed a vicious curveball for strike three as the Japanese crowd exploded in pride. Sawamura followed it up the next inning by striking out Lou Gehrig to lead off the inning, making four consecutive strikeouts against the heart of one of the most vaunted lineups ever assembled.

Sawamura held the Americans without a run until the seventh inning, when a solo home run by Gehrig gave the All Americans a 1-0 victory. However even in defeat, Sawamura’s performance had made him an instant national hero in a country in the midst of intense nationalism and imperial desires.

When Mack, the American manager, tried to offer a Major League contract to Sawamura after the game, the teenager declined and said that he hated Americans. He instead opted to sign with the Tokyo Giants, where his stardom continued to expand as he dominated Japanese baseball for a few seasons that included the first no-hitter in the history of Japanese league.

When the war took off in earnest following the Japanese attack on Pearl Harbor, Sawamura served three combat tours in the Japanese Imperial Army. During the last tour, in November 1944, nearly ten years to the day after his famous performance against Ruth and Gehrig, an American submarine torpedoed a Japanese transport ship carrying Sawamura and others, and the pitcher was killed.

Two years later, a Japanese magazine named the award for best pitcher in Japan –– the equivalent of MLB’s Cy Young Award –– in Sawamura’s honor, and the award still carries his name to this day.