The Best Attended and Most Interesting Game in Wichita

The Wichita Eagle called it "The best attended and most interesting game in Wichita".

This time it was against the Wichita Klan #6, in a ballfield on a sandbar in the middle of the Arkansas River at city owned Island Park Stadium.

A call went out before the game that "no strangleholds, razors, horsewhips and other violent implements of argument are allowed". Pre-game instructions by the umps were that anyone attempting to bat with a cross would be immediately disqualified from the game.

Turnout for both sides was huge. The game was tight. 1 to 1 through the 5th inning. 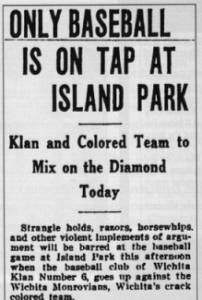 We imagine the 2nd half of the game must have been a nail biter. Monrovians catcher Thomas Jefferson, named after the our 3rd president and known by his fellow team mates Chicken, Red Horse and Six Shooter as "T-Baby" probably saw and heard a lot as he played that day. There are no recorded accounts of what it was like in the stands or on the field during this game, but there is historic record to help understand the situation a little better.

In 1925 the Ku Klux Klan was about a year away from getting kicked out of Kansas. In January 1925, the Supreme Court ruled that the Klan was a sales organization, not the benevolent society they were attempting to sell themselves as, and that they could not operate legally without an official state charter. Six months later, on June 3rd, 1925 (18 days before the game) the Klan's application for charter was denied by the state of Kansas. The writing was on the proverbial wall. So the Klan turned up their PR to highlight just how much they were the misunderstood good guys, unfairly maligned. Their campaign included donations to the local hospital, food and clothing drives for the needy as coordinated hooded photo ops, and playing multiple Santa Clauses at Christmas time. Come summer game time, just to show how fair they were, the Klan offered up the idea that the game be umpired by two official Catholics! Thats right. Two Irish Catholics umping a game between themselves and an all black barnstorming baseball team. At this point it is important to note that in the 1920's, the segment of American society that received the full force of the KKKs ire were not black folks, but Catholic folks. Most especially of the Italian persuasion. Wether the move to ump the game via Irish Catholics was really made as an altruistic gesture of fairness or a covert tactic to call question onto the calls made by the umps is debatable. Both possibilities do exist.

The Wichita Morovians were named for the capital of the African Nation of Liberia by club president J.M.Booker who found the name to be symbolic of self determination. Liberia was settled by free blacks in the 1800s and Mr Booker thought Monrovian was an aptly fitting name for the team formerly known as The Black Wonders. Being a lawyer and political activist, he knew how to build a solid team and a solid foundation. The Wichita Monrovians were incorporated as The Monrovian Corporation (later the Monrovian Park Association) with a stock value of $10,000. Thats a value of roughly $150,000 today. The Monrovians were an unparalleled social force in Black Wichita. In 1922 they secured their own ballpark in downtown Wichita at 12th and Mosley, called Monrovian Park, almost unheard of for black baseball teams of the day. There the Monrovians played any and all teams, regardless of skin color. Specifically, they played to make money. If you were down to play for receipts- so were they. The Monrovians were an incredibly skilled team of independent professional barnstorming ball players, save for the one year they dominated the single season Western Colored League in 1923, with a reported 52-8 game win record by July of that season. The Monrovians were good and just men. Game tickets raised funds for local social causes in the Black community, most especially Phyllis Wheatley's Childrens Home. Around the time of this game in 1925, Phyllis Wheatley was busy fielding one of the first organized all women baseball teams in history, but that is her story to be told another time. Back at Monrovian Park, the games played were safe and fun filled events where the Black community could come together, relax and have fun socially without restrictions or worry. They loved their team and the team loved them back. So when game time with Klan #6 came, they showed up, large and in charge to support their home team on a hot Sunday afternoon while the hot winds blustered.

While we don't know the exacts of what the Monrovians or their fans experienced that day, it is reported that the game was played without incident. What can be surmised is that the Monrovians and their loyal fan base went home that day knowing their team had superior game to that of the Ku Klux Klan. 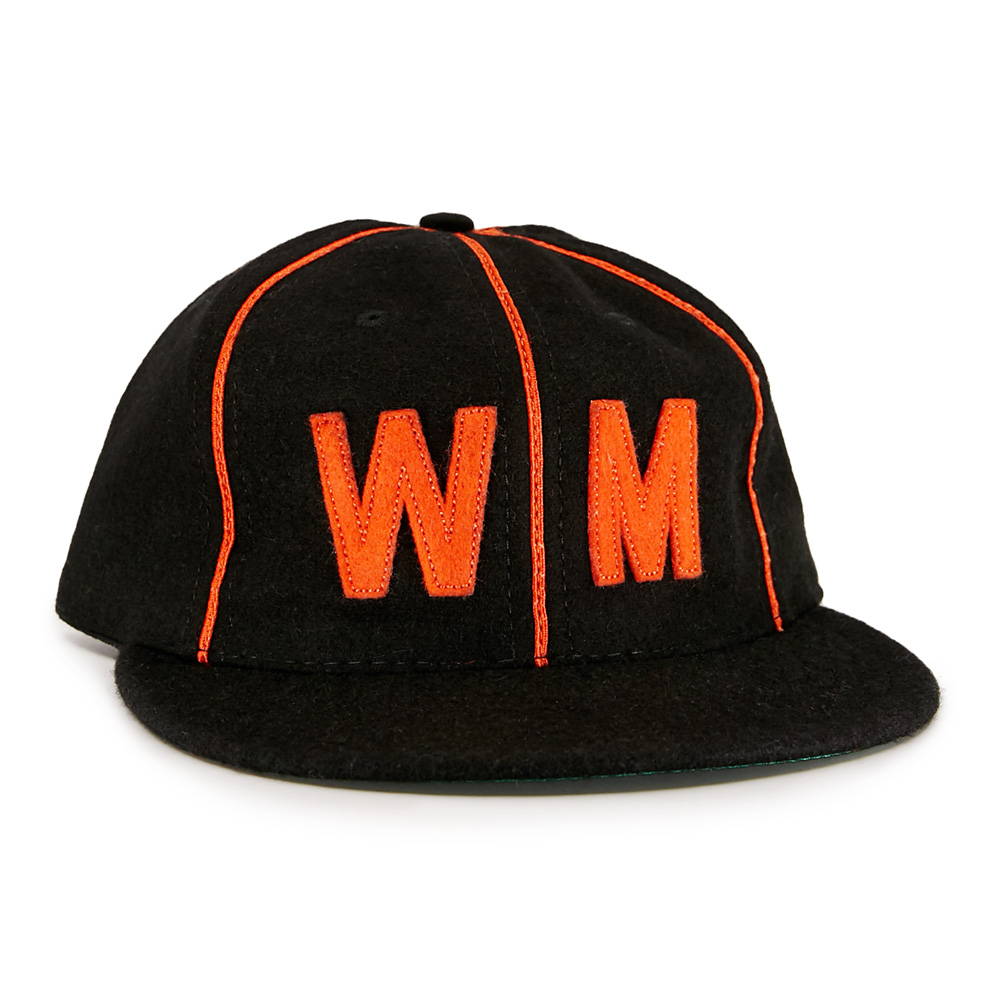 This project has been a joy to research, and we look forward to sharing ore of these great caps with you throughout the remainder of the year.